Travis Scott called to deny rumors that he spent out with reported ex-fling Rojean Kar during his relationship with Kylie Jenner.

In response to the Instagram model’s supposed proof that the two were recently on the same set of one of his projects, the rapper addressed the “strange s-t” going on late Saturday on his Instagram Story.

“An uninvited person was sneaking photos on what was supposed to be a closed set while I was directing a video,” he claimed. “I don’t know this person. I’ve never been with this person.”

Scott, 31, then seemingly asked Kar directly to “stop with the continuous cyber games and the fictional story telling.”

The two were reportedly first linked in 2013, long before the musician began dating Jenner, 25, with whom he shares two children.

Over the years, internet sleuths have found clues that seem to imply Scott and Kar never fully cut ties.

She was also rumored to have been involved in his brief split from Jenner in 2019, which the model referred to at the time as “a false narrative.” 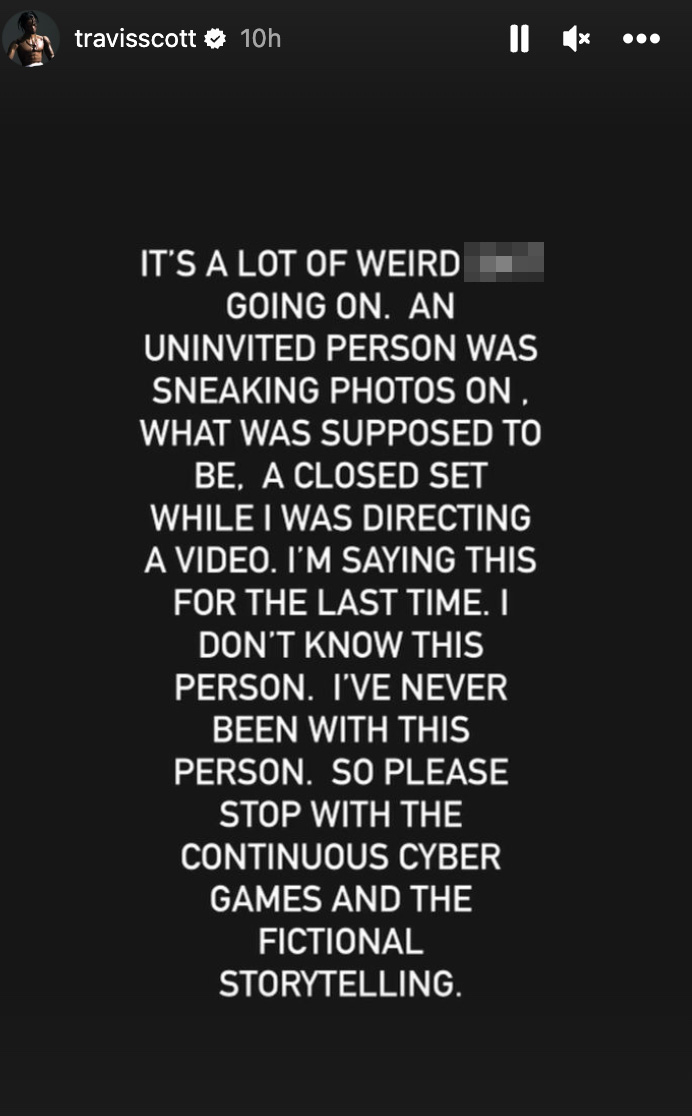 Kar then shared a video on her Instagram Story a few days ago, showing her behind the camera on the set of an apparent music video shoot. Scott could be seen in the distance. “Obviously, I’m directing,” she stated at the start of the video.

Scott, possibly unwittingly, appeared to confirm the aforementioned situation when he shared his own photo from what appeared to be the same scene.

He re-posted his statement and hit back in a series of sneaky videos after denying Kar’s accusation and even knowing who she was.

“What we’re not gonna do is we’re not gonna lie on me. … I pretended I didn’t know you, went along with whatever f–king narrative … no matter how much bulls–t I got from it,” she said.

Kar insisted she “was invited to that video shoot,” though she did not say by whom, adding that she never shows up anywhere uninvited and has “never taken a sneak picture in [her] f–king life.”

“Should I have posted that? No. Was it messy? Absolutely,” she admitted.

The model also claimed that she spent Valentine’s Day with Scott, stating, “I bolted out the f-king door, and you had every single female I know blowing me up like, ‘Travis is begging for you.'” Please return.’ “Are we pretending that also didn’t happen?”

She added, “You cheat on that bitch every single f–king night. The whole f–king city sees it! Don’t do this.”

Kar also doubled down on her previous denial that she was the rumored “mistress” from “a few years ago,” insisting she was not “the reason that anything transpired between [Scott and Jenner].”

“But nothing he’s saying right now is true, and that bothers me – to make me look like a whack-ass bitch,” she said. 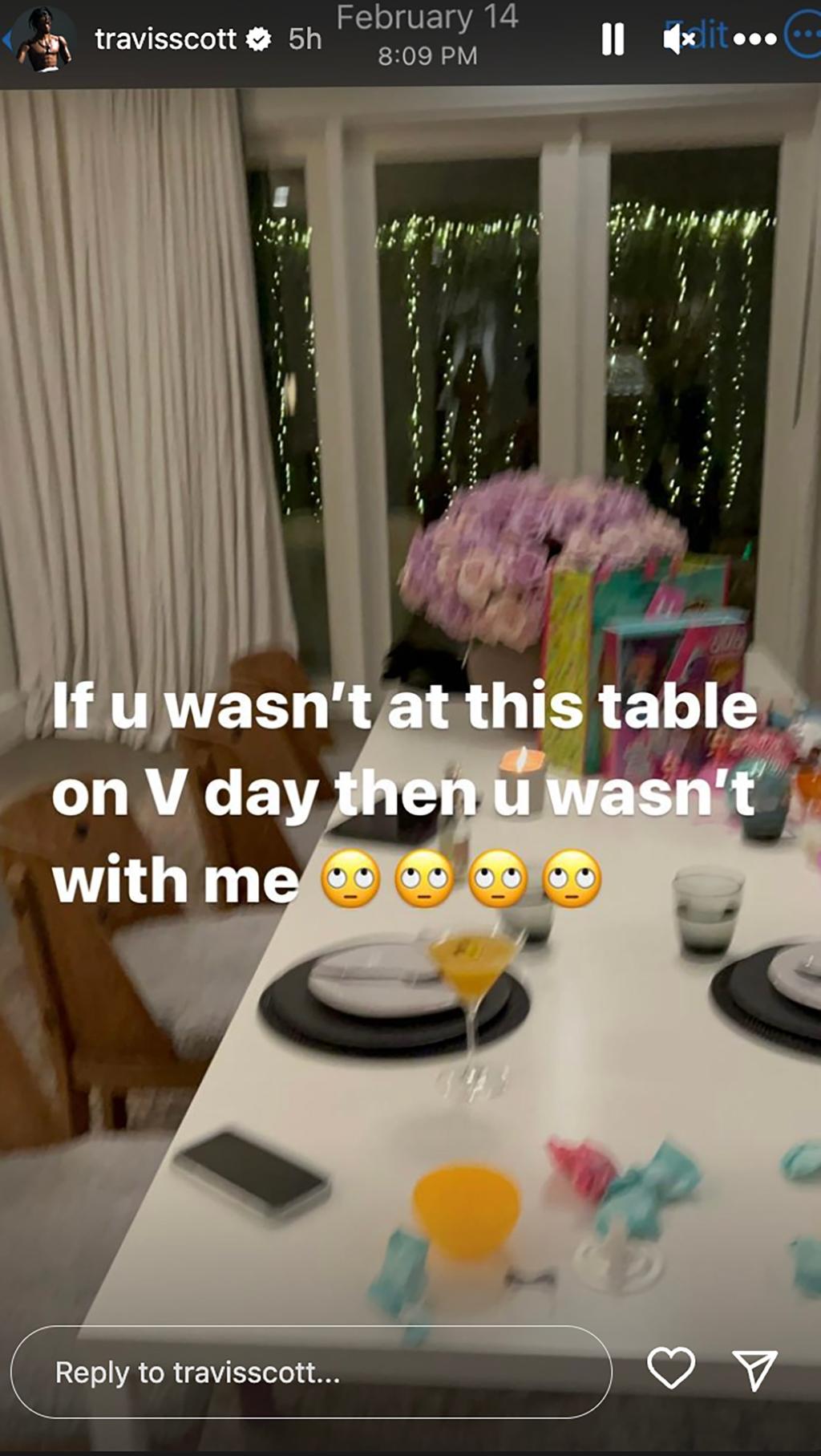 On Sunday, in an apparent response to Kar’s Valentine’s Day claim, Scott posted (and has since deleted) a photo taken on Feb. 14 at 8:09 p.m. that showed a dining room table set for a meal and decorated with a bouquet of flowers.

“If u wasn’t at this table on V day then u wasn’t with me 🙄🙄🙄🙄,” he wrote atop the image, implying he spent the evening with Jenner and no one else.

Kar then posted messages that she claims prove she and the rapper were at the same event later that night.

“Maybe your brain is all scrambled from like all the Molly you take.. but you was at Gunna’s party on Feb 14th aka Valentine’s Day 😂,” she wrote, going on to allege that she “had 10 missed call[s] from [Scott’s] friends … [as] soon as [she] left 🤔.” 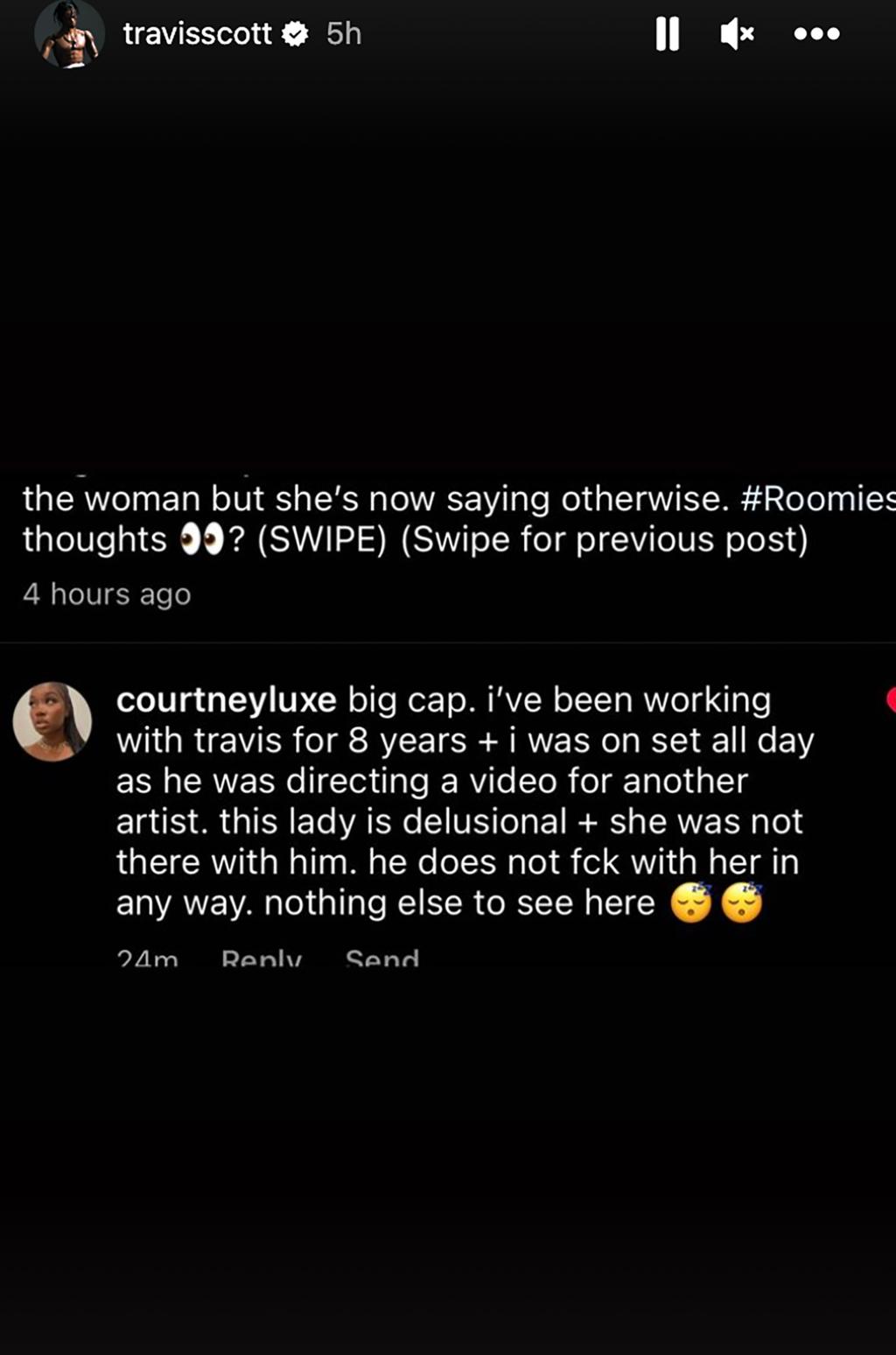 In another post-and-delete, Scott shared a message from a woman who said she’s “been working with travis for 8 years” and “was on set all day as he was directing a video for another artist.”

The woman claimed Kar “was not there with him” and called her “delusional.”

“He does not fck with her in any way. Nothing else to see here 😴😴,” the woman concluded.

A screenshot of her message on Scott’s IG Story was captured and posted by The Shade Room.

“Why don’t he just sue? She’s been stalking him for years,” a social media user commented, prompting Kar to reply, “I was the one getting stalked not the other way around.”